As Gibson’s Bar & Steakhouse celebrates its 25th anniversary, we look back at 25 things we love about the iconic Chicago steakhouse. 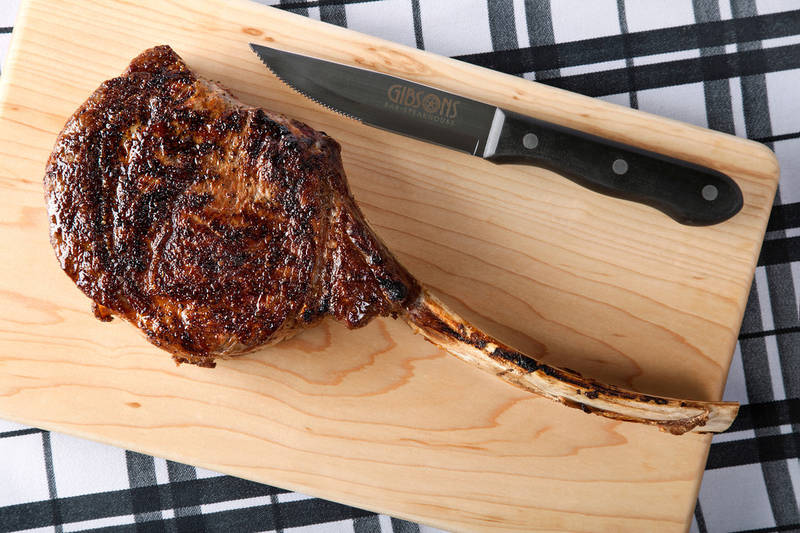 In the restaurant industry, a 25th anniversary is almost as unheard of as a 25th marriage anniversary in Hollywood. Which is what makes Gibson’s Bar & Steakhouse such a beautiful anomaly. The venerable, iconic Chicago steakhouse is celebrating its 25th anniversary at its flagship Gold Coast location, celebrating with a slew of specials, giveaways, and a stellar new menu addition. But along with all of that jazz, I thought I’d recount some of the ways that Gibsons has touched all of our hearts, and not just by cutting off circulation with beautifully marbled beef. As Gibson’s Bar & Steakhouse commemorates its quarter century birthday, here are 25 things to love about the Chicago staple:  Gibson’s Video

1). If Johnny Depp likes it, you like it. Gibson’s Bar & Steakhouse can add one of Hollywood’s preeminent leading men to its roster of die-hard fans. He loves it so much he once spent more than $4,000 on dinner there.
2). The people-watching is to die. Perched at the nexus of the Viagra Triangle, Gibsons makes for some of the best gawking in the city, as passersby linger in the stigmatized square, rich Gold Coasters swivel by with their fur coats billowing behind them, and tourists amble around cluelessly.
3). Charitable steak just tastes better. The steakhouse is all about a good charitable cause, giving back to the community whenever possible. Such as this recent endeavor with the Chicago Bulls.
4). Cha ching! Gibsons regularly clocks in as one of the country’s most profitable restaurants, which is downright impressive. Makes me proud to have such a heavy-hitter in Chicago.
5). You gotta love a steakhouse that doles out more than $25,000 worth of prizes. Starting March 27, the restaurant kicks off “25 Days of Gibsons,” which is like 25 days of Christmas, but better because steak > Santa. Guests can enroll in a daily raffle on Gibsons’ website, with the chance to win daily prizes or the grand prize: an all-expenses paid trip to Napa Valley. It’s not every steakhouse that sends you on vacation.
6). Who says you can’t teach an old dog new tricks? Not that Gibsons is an old dog, but whatever. The longstanding steakhouse is rolling out a brand new menu addition for its anniversary, a USDA Gibsons Prime Angus steak dubbed the Gibsons 42 Chop, named in honor of Gibsons regular Chicago Bears’ 1943 NFL MVP Sid Luckman. The steak is a 32-ounce behemoth dry-aged for seven weeks.
7). The wall of fame is our very own Hollywood Walk of Fame. Forget about the starry streets in L.A., Gibsons has its own impressive wall blinged out with photographs of stars from near and far who adore the restaurant. Because beef just tastes better under the watchful gaze of Mike Ditka.
8). A loose dress code ensures that the atmosphere at Gibsons is perpetually chic and classy. Sure it’s still comfortable and casual, but their “no sleeveless shirts” rule filters out the unruly bro types. Many patrons don suits, while others opt simply for a thoughtful jeans combo, but either way the ambience is consistently well-clad.
9). Beef you can feel good about. The imminent lecture from your heart doctor will go a lot more smoothly once you tell him/her that your steak consumption comes from locally sourced cows, which is a helluva lot more wholesome. Gibsons sources beef from upper Midwest sustainable farms, specifically selecting Black Angus cattle for its menu, corn-fed for 120 days and aged for 40 days to ensure the utmost flavor and texture.
10). Americana at its finest. From jumbo shrimp cocktail to wedge salads, crab cakes, and burgers, Gibsons does nostalgic Americana like no other. These are regional items revered throughout the country, and while they are most often relegated to banquet halls and receptions, Gibsons does a masterful job fine-tuning the simple things in life, reminding us all why we fell in love with them in the first place.
11). The seafood is great too. Steak is king at Gibsons, but the seafood should not be overlooked either. The restaurant features an impressive array of impeccable nautical provisions, from lobster rolls and swordfish to salmon sandwiches and oysters. The menu makes for some of the greatest surf & turf in Chicago.
12). Don’t forget dessert. When it comes to belt-busting fare at Gibsons, the steak takes the cake. But don’t overlook the mile-high carrot cake, which boasts an embarrassing amount of layered cake and enough frosting to satiate a horde of sweet toothed fiends.

13). And martinis. Gibsons famously sports some of the largest martinis in the city, in line with the restaurant’s proclivity for things that are hulking and indulgent. But you need all that liquor to help balance all that protein and cake, right?
14). Probably the only thing on the menu that isn’t massive is the sliders. These mercifully demure snacks come three to an order, featuring dainty portions of filet mignon, tilapia, and turkey burgers.
15). And eggs! The filet medallions Benedict is what steak and eggs dreams are made of. Gibsons also features a thorough eggs section of the menu, with items such as crab cake Benedict, cheese omelettes, and filet & eggs.
16). And creamed spinach! Yes, all your favorite steakhouse sides are present and accounted for. Including creamed spinach, asparagus with hollandaise sauce, fries, scalloped potatoes, and baked sweet potatoes. One of the best is the roasted cauliflower Gruyère.
17). The wine list is pretty stellar. With ample American selections and tons available by the glass, there’s lots to pour over here. Plus magnums!
18). Private dining to the nth degree. With six rooms on-site for private dining, Gibsons is destination number one for pretty much anything and everything you and 200 of your closest friends could ever want. The restaurant has room for between 12 and 200 for a seated affair, or up to 500 (!) for standing cocktail receptions.
19). Career waiters make for a memorable experience. This is one place where the waitstaff is as well-seasoned as the steak. The average tenure for waiters at Gibsons is 10 years, which is insane in the best way. These buttoned up staffers know what they’re doing and their passion is palpable, making for an exemplary dining experience.
20). The Montgomery Club. There’s just something about the Montgomery Club, a separate event space in River North that features food from Gibsons, that makes attendees feel like fanciful American aristocrats. The 8,000 square foot space is available for any type of group event, from small dinner party to cocktail reception for upwards of 1,000 people. Whoa.
21). Silver anniversary specials. In honor of their 25th birthday, Gibson’s Bar & Steakhouse is doing the unthinkable: reducing all of their steaks to $25 on April 21 all day long. That means getting a $54.75 bone-in filet mignon for $25. It also means getting the new $99 Gibsons 42 Chop for about 1/4 of that price.
22). You’re never far from your next Gibsons fix. Unless of course you are nowhere near Chicagoland. Along with the flagship Gold Coast locale, Gibsons has locations in Rosemont and Oak Brook, giving some love to the ‘burbs and Chicagoans near and far. But not too far, because this is a Chicago institution after all.
23). Bring some of their seasoning salt home with you. One of the keys to Gibsons’ delicious steaks is in its seasoning salt, which conveniently is available for purchase. Visit here to buy your own jar of salt and bring a little bit of Gibsons home with you.
24). Gibsons fosters a sense of family. This is the type of restaurant populated by regulars, where the atmosphere feels like a familial dining room and where everybody knows one another. It’s a homey environment that makes guests feel appreciated and at home, something rare in the restaurant industry.
25). Like a fine steak, Gibson’s gets better with age. When Gibson s opened its doors in 1989, the dining landscape in Chicago was wildly different than it is today. Yet Gibson s stayed strong in the Gold Coast, acting as a resolute anchor in the industry as the city continued to develop and make a name for itself as one of the world’s foremost dining cities. Through it all, Gibsons remains one of Chicago’s most noteworthy destinations, an impressive feat worthy of admiration and respect.

So, Is Gibson’s The Best Steakhouse Ever?