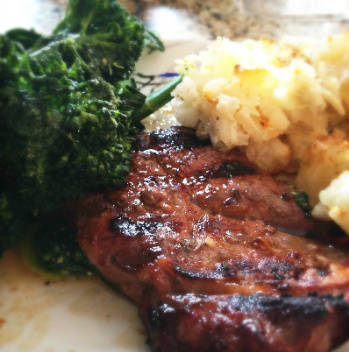 What sort of person orders a 48-ounce steak and proceeds to devour it after consuming a couple of appetizers and salad? That’s a guy with a hearty appetite and an apparently well-padded wallet. He’s the type of customer welcome in any Chicago steakhouse, and there are quite a few that cater to his lavish tastes. We gather the very best selections around town for your indulgence.

Benny’s Chop House. This classic steakhouse offers modern accents in its dining room, which sets the mood for a romantic night out. A man with exquisite taste will certainly be drawn to the dry-aged, 30-ounce Porterhouse. Great complementary sides include crispy kale topped with garlic vinaigrette, honey-glazed carrots and wild rice infused with cherries and pistachio.

Mastro’s. When you’re one of the trendiest steakhouses in town, you’ve got to do everything over the top. That’s why you’ll find a double-cut, 48-ounce Porterhouse on the menu at this scene-y River North hot spot. Perfect sides include the Alaskan king crab black truffle gnocchi, lobster mashed potatoes and roasted Brussels sprouts.

Perry’s Steakhouse & Grille. The family-owned chain opened a massive location of its steakhouse concept in Oakbrook in fall 2013. The prime, bone-in New York strip is only 20 ounces, but because it’s cut to order it is possible to “super size” it. It’s seasoned with kosher salt, black pepper and herb-garlic butter. Sides are served family style, such as roasted sherried mushrooms, sweet sriracha Brussels sprouts and Lyonnaise potatoes.

Gibson’s Bar and Steakhouse. The Gold Coast’s biggest player turned 25 in April 2014, and to celebrate, owners added the 42 Chop to the menu. That’s 42 ounces, of course, and it’s named in honor of Bears legend Sid Luckman. The 48-ounce Porterhouse and 32-ounce roasted prime rib are also heavy favorites that often complement the blue cheese scalloped potatoes.

Chicago Cut Steakhouse. That discerning guy may dine next to a view of the Chicago River and indulge in dry-ages steaks that are some of the most generous in town. Double cuts of the Porterhouse and bone-in ribeye are 48 ounces. They may also be topped with truffle salt, Cajun spice or foie gras for a few extra dollars. No man would want to eat the meat alone, so pair it up with opulent sides like truffle scalloped potatoes, French green beans and lobster mac ‘n’ cheese.